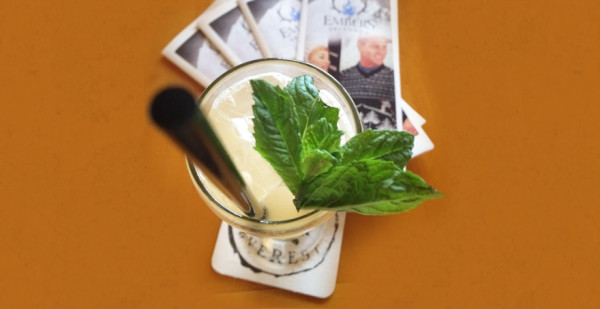 May 7 – Meanwhile, elsewhere on 12South, there’s a new kid on the block from the team behind Mafiaoza’s: the Pacific Northwest-inspired Embers Ski Lodge, a gastropub that debuted a few weeks ago just barely missing out on ski season.

It’s on the smaller side at just 2,400 square feet and is meant to channel the Ajax lift at Aspen Mountain. With a large indoor fireplace and a two-story open-air patio, it does feel like you’ve stepped off the slopes, stored your boots away for the day and are ready to soak up the apres scene. (Too bad the one thing missing in Nashville is a ski mountain!)

The lengthy menu, displayed on what is intended to channel a mountain map, is an interesting mix: Foie gras toasted pound cake is dressed up with house-made strawberry jam and jalapeno tare sauce (and tastes more like dessert than an appetizer); the cod bites are Alaskan cod that’s been battered in beer. Our crew ordered both, along with a platter of the fries, which came with our choice of two dipping sauces (we opted for Sriracha cream and sundried tomato mayo), and immediately devoured the entire spread.

For those looking for heartier dishes, there are plenty of options like the Mt. Everest cheeseburger, savory French toast or a reindeer sausage sandwich on a New England-style hot dog bun drizzled with blueberry mustard.

I was there mainly for the cocktails (always), which did not disappoint. My favorite was one of the signature drinks, the Shim Sham, a whiskey concoction with peach and Earl Grey tea, but I also tried the Horseradical, a gin drink served with horseradish as the name might imply, and the Stars and Strips, an explosion of flavor with bourbon, orange, cherry wood smoke, ginger and a handful of other subtle ingredients.