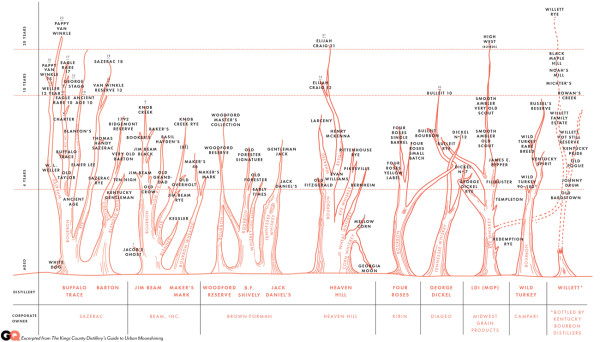 A few words on how to read this chart…
This chart shows the major distilleries operating in Kentucky, Tennessee, and Indiana, grouped horizontally by corporate owner, then subdivided by distillery. Each tree shows the type of whiskey made, and the various expressions of each style of whiskey or mash bill, in the case of bourbons. For instance, Basil Hayden’s is a longer-aged version of Old Grand-Dad, and both are made at the Jim Beam Distillery. Some of this is imprecise. Buffalo Trace has two bourbon mash bills, but it isn’t known which of its many brands are made from each, so this is a rough guess based on online commentary. Willett, formerly only a bottler as Kentucky Bourbon Distillers, has been distilling its own product for about a year; I include the brands that it bottles from other sources for reference. The ages are taken from published age statements if they exist; if they don’t, brands have been plotted in the general area where I would guess they belong.

…And 5 things you can learn from it

Buffalo Trace Mash Bills
Let’s start with the basics: A mash bill is the recipe of grains used to make whiskey. All bourbon is at least 51 percent corn; the rest can vary. Most of the large Kentucky distilleries make three types of bourbon mash—one flavored with rye, one flavored with a little more rye, and a third flavored with wheat—and develop different products by aging those three mash bills to meet various grades and price points. At Buffalo Trace, these three bourbon mash bills and a rye whiskey recipe become at least 15 labels and many reserve and limited-release variants within those labels. To read those labels, one would hardly imagine that the Blanton’s Distilling Company, W. L. Weller and Sons, and the Old Rip Van Winkle Distillery are all fanciful names for the same distillery, Buffalo Trace, that distills 60,000 gallons of mash into bulk spirit in a continuous still. While the four mash bills contribute to the flavor, the more significant differentiation among brands is done in the warehouse, where the type of construction, placement within the warehouse, and duration of aging have a stronger impact on the finished spirit.

Jack Daniel’s and the Lincoln County Process
Jack Daniel’s was started by its namesake distiller in the 1870s and is now the largest-selling American whiskey in the world. Jack Daniel’s is a Tennessee whiskey, which is differentiated from bourbon only in that it is made in Tennessee and filtered through maple charcoal before aging, a method known as the Lincoln County Process. This gives it a stronger wood character than bourbon aged for the same amount of time. Jack Daniel’s meets the criteria to be called bourbon, but contrarian Tennesseans long ago settled on the distinction of Tennessee Whiskey, which is still not a Federally recognized category. State law now mandates new Tennessee distillers must use the Lincoln County Process, though Pritchards, which was making Tennessee Whiskey without it before the law, gets grandfathered in. From the point of a view of a craft distiller, the charcoal filtering is a bit of a cheat, since it makes the whiskey taste somewhat more mature than it is; but they’ve been doing it for 140 years, so it’s hard to argue that they are doing it wrong.

There are only two widely distributed “commercial” Tennessee Whiskeys. George Dickel is the other.

Can’t find Pappy? Go for Weller
Pappy Van Winkle is frequently described by both educated and uneducated drinkers as the best bourbon on the market. It is certainly aged for longer than most premium bourbons, and has earned a near hysterical following of people scrambling to get one of the very few bottles that are released each year. Of the long-aged bourbons, it seems to be aged very gently year-to-year, and this recommends it enormously. But if you, like most people, can’t find Pappy,try W. L. Weller. There’s a 12 year old variety that retails for $23 around the corner. Pappy 15-year sells for $699-$1000 even though it’s the exact same liquid as the Pappy (same mash bill, same spirit, same barrels); the only difference is it’s aged 3 years less.

Willett Distillery, in Bardstown, is also known as Kentucky Bourbon Distillers. It is technically on the craft distillery trail in Kentucky, though it must certainly be the craft distillery with the largest productive capacity in the country. The Willett family made bourbon since the1850s and officially as a company since 1935, until the 1970s oil crisis,when the distillery converted to fuel-ethanol production. When crude- oil prices stabilized, the family got out of distilling, and the plant served only as a bottling facility for whiskeys sourced from other distilleries. Last year, the younger generation of the family built a new distillery with a twenty-eight-inch rectification column and a new pot still doubler from Vendome. Willet filled one of their old rickhouses with its first year of production, and gradually will grow stock of its own distilled product. The white dog off the new setup is excellent, bright and buttery.

All of what is bottled at Willett is distilled elsewhere for now, but unlike a lot of distilleries who source their product, the folks at Willett seem especially good at this task–it’s very hard to go wrong with any of their labels (though it’s also hard to know what differentiates them sometimes, if anything). Labels bottled by Kentucky Bourbon Distillers include: Johnny Drum, Old Bardstown, Noah’s Mill, Rowan’s Creek, Pure Kentucky. A few other brands are bottled for other companies, including Black Maple Hill, Michter’s, and Old Pogue. The distillery’s own Willett line is for now contracted from elsewhere, though that will likely change when their aging stock comes due.

WTF is LDI Rye
The distillery in Lawrenceburg, Indiana is known colloquially as LDI, but is now part of MGP, a food conglomerate that specializes in bioplastics, industrial proteins, and starches for use in salad dressings,energy bars, imitation cheese, and fruit fillings. One of the products made in the Indiana facility is a rye whiskey with a mash bill of 95 percent rye, 5 percent malt barley. Most rye whiskeys are no more than 70 percent rye. According to author Chuck Cowdery, this particular whiskey was developed by Seagram’s as a flavoring agent for blended whiskeys like Seagram’s 7. When Seagram’s disintegrated due to mismanagement in the 1990s, the whiskey, then in the process of aging, was sold to other distilleries in the fire sale of assets, as one salvage company after the next tried to determine what to do with the distillery and its excess inventory. This is how one generic whiskey became known by more than a dozen names, including Templeton Rye, Redemption Rye, Bulleit Rye, Willet, Smooth Ambler, and George Dickel Rye, among others. The companies that own each of these brands have purchased LDI rye whiskey and now bottle it under their own labels, adjusting the proof and length of aging in order to create their own differentiations.

If it is surprising that about half of the rye brands on liquor shelves today are made in a single, industrial facility, it is even more startling that many of these brands are so-called craft distilleries. Of the remaining non-LDI ryes, only a handful are produced in the distilleries suggested by their label. While Jim Beam rye is indeed made at Jim Beam, Jefferson’s Rye is made in Canada. Rye is hard grain for craft distillers to use: it’s sticky and extremely hard to clean, and at worst can burn to the still and cause smoke to enter the column with the vapor. Some craft distillers have figured it out: Old Potrero, a side project of the Anchor Distilling Company that is one of the only American rye whiskeys aged in uncharred oak, is excellent.

The Kings County Distillery Guide to Urban Moonshining (Abrams; $25) is available on Amazon.