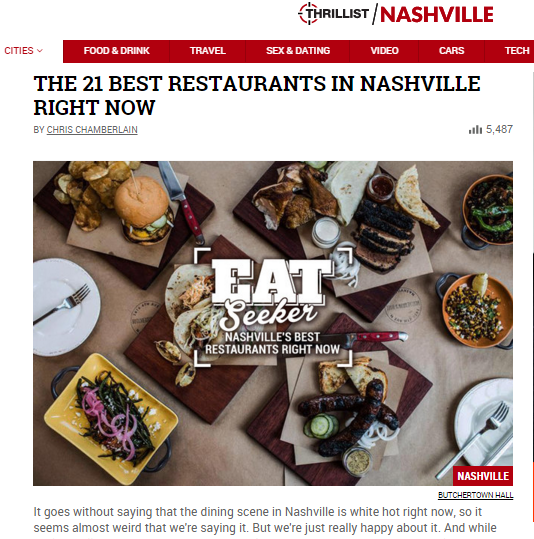 It goes without saying that the dining scene in Nashville is white hot right now, so it seems almost weird that we’re saying it. But we’re just really happy about it. And while we love telling you about the many new places that keep opening up, we’re also interested in the more tried-and-tested restaurants too. That’s why we’re introducing Eat Seeker: a list of the 21 best restaurants in nashville where you should eat right at this very moment. We’ll be updating it regularly to ensure it has our all-time favorites, the best new openings, or simply our go-tos that help us survive Nashville in the winter, so bookmark this page for the next time you’re wondering “where do I eat tonight?”

In addition to some excellent upscale American comfort food coming off the wood-fired grill in the kitchen, the dining room at 5th & Taylor offers one of the most dramatic environments in town. A massive statue of General Francis Nash, the city’s namesake, dominates the space and bold artwork creates an ambience that makes the whole evening a little more exciting.

The 404 Kitchen is as intimate as 5th & Taylor is expansive, but the dishes emerging from the tiny kitchen are full of big flavors and artistic prowess. Emphasizing local ingredients to create a modern take on classic European cuisine, The 404 Kitchen is the best thing to come to the Gulch in a shipping container since the Station Inn next door took what we assume must have been a huge delivery of banjos.

Although you might need a map to find your way around this massive four-story eating and drinking complex, once you make your way to the back of the main floor to order your food, you’ll be rewarded for your persistence with plate after plate of outstanding Southern fare, much of which displays fun international twists. Add in a long roster of craft beers and creative cocktails plus live music and one of the best views of Downtown from the rooftop deck, and you’ve got a one-stop entertainment destination.

Whether you knew that Nashville was looking for a raw vegan restaurant or not, Avo has arrived to fill that void, and even devout carnivores are finding something to love at this inventive eatery. None of the food is heated above 118 degrees to maintain the nutritional content of the plant-based ingredients, and the creative workarounds to coming up with raw dishes only lead to more interesting food. It’s the ideal spot to stop for some detox on the way to your annual physical.

Fans of breakfast for lunch (or breakfast for breakfast for that matter) are flocking to this refined Gulch eatery for Karl Worley’s take on the humble biscuit. Using multiple different recipes for its fluffy golden creations, Biscuit Love offers both sweet and savory dishes ranging from classic biscuits and gravy, to an infernal hot chicken dish, to a masterpiece of a biscuit/donut hybrid it calls a “bonut.” Did we mention this place also serves beer, wine, and booze? Perfection!

It’s all about the smoke at Butchertown Hall, where diners order hot-off-the-pit sausage, brisket, pork carnitas, and other meats by the pound. It’s a toss up whether oak smoke or the dramatic subway tile interior contributes more to the ambience of the restaurant, but no matter which strikes your fancy, this attractive smokehouse is a fantastic place to order unique beers and down-to-earth food.

When celebrity chef Maneet Chauhan announced she was opening a restaurant in Nashville, nobody would have expected that she would become such an active fixture in the community so quickly. Not only has she moved to town and added to our population with the birth of a child, but she’s also recently partnered with the new Mantra Artisan Ales brewery to up our beer game. But it’s the spicy Indian food at her sexy new eatery that has really improved our standard of living.

Part butcher shop, part sandwich counter, and part bar, Cochon Butcher is all good! The offshoot of the original Cochon opened by James Beard Award-winning chefs Donald Link and Stephen Stryjewski in New Orleans, Cochon Butcher offers up a menu of meaty sandwiches and delicious sides plus deli cases full of sausages and prepared meals to take the hassle out of your dinner at home. Dine in or carry out, Cochon always delivers.

Although the topography of Nashville doesn’t exactly lend itself to skiing and snowboarding, that doesn’t mean you can’t just skip the strenuous part and proceed directly to the après-ski activities like eating and drinking. Embers Ski Lodge re-creates the sensuous atmosphere of a vacation destination where inhibitions are let down and girls (and guys) just wanna have fun. Plus it has a damn fine cheeseburger.

In just a few years, Etch has become the go-to destination to kick off or cap off an evening of Downtown fun for those looking for a fine-dining experience near the various sporting and entertainment venues in the surrounding neighborhood. Chef Deb Paquette loves to have fun with her food and shares the joy by using bold spices and dramatic flavors to create exquisitely plated meals. A seat watching her kitchen from the chef’s bar is at least as exciting as watching the Titans play in nearby Nissan Stadium!

From the outside, Fifty First Kitchen & Bar appears to just be a small private home in a burgeoning West Nashville neighborhood, and while it certainly is homey inside, what’s going on in the kitchen is way more interesting than anything your mom ever cooked. Chef/owner Tony Galzin creates thoughtful and beautiful plates of rustic Italian cuisine that are served alongside an impressive Euro-centric wine list and a menu of clever cocktails.

Plenty of Nashville restaurants change their menus seasonally based on what ingredients are at their peak of ripeness, but Husk comes up with a new menu just about every day, both for lunch and for dinner. Self-described as “a celebration of Southern ingredients,” Husk benefits from the fact that Chef Sean Brock is spending even more time in Nashville than at his other restaurants in Charleston and Atlanta. With Brock overseeing the talented staff, the minute details of the meticulous and delicious dishes are even better than when it first opened.

What do you get when you cross a casual bistro atmosphere with local ingredients and a talented chef with Pennsylvania Dutch sensibilities? An excellent restaurant called Josephine, that’s what. Chef Andy Little has turned 12South on its ear with his brand of cooking, particularly during his weekends-only 10×10 special prix-fixe dinners where some courses arrive at the table plated on a long plank, with each course portion set right in front of lucky diners’ gaping maws. Dig in!

The latest offering from the successful team behind The Catbird Seat, The Patterson House, Pinewood Social, and other favorite Nashville eating and watering holes is Le Sel, a modern French restaurant on the ground floor of the Adelicia building. From the sexy graffiti-inspired decor to the French hip-hop pumping through the speakers, a meal at Le Sel is stimulating to your eyes and ears. Chef Rene De Leon’s take on updated classic French dishes will make sure your tongue gets in on the fun as well.

In addition to serving as the flexible kitchen for some really outstanding pop-ups for visiting chefs, Little Octopus also serves up some pretty remarkable food on its own. Chef Daniel Herget relies on South Florida and Latin influences to create cuisine using fresh regional ingredients, including lots of organic items. The resulting menu is a melange of of inventive dishes that you won’t find anywhere else in town.

A true community restaurant and bar, Lockeland Table has quickly become the neighborhood clubhouse for Lockeland residents seeking a convivial atmosphere and soulful food. Chef Hal Holden-Bache and GM Cara Graham have recently released a new book that tells the story of the restaurant’s founding and shares the philosophy and recipes behind their brand of Southern cuisine. Read it, then eat it!

There’s not a more stunning scene in Nashville than the Vegas-like dining room at Prima in the Gulch. The massive chandeliers are truly works of art, but more importantly, they cast their light on plates of Chef Salvador Avila’s contemporary American cuisine that he tweaks with European and Latin American influences. The comfy bar also hosts one of Nashville’s most underappreciated happy hours with fun and funky snacks to accompany signature cocktails.

Permanently busy, crowds fill the tables for Chef Philip Krajeck’s rustic European fare here. But there’s always the community table and the first-come, first-served patio when the weather allows. The kitchen’s expertise with pasta and slow-cooked meats is definitely worth the wait, and you can always enjoy a delicious cocktail (or three) at the bar.

While the menu at Silo is still dominated by elevated Southern plates of meat-centric specialties, a new chef has introduced some German and Italian nuances to the party. This is even more appropriate considering the heritage of the surrounding Germantown neighborhood where condos and apartments continue to fill up with emigres from all over town. Once they discover the restaurant’s down-home Southern brunch, they’ll definitely want to renew their leases for another year.

Not really in the Gulch or in 12South, Thai Esane is more of a buffer between those two red-hot neighborhoods, but it draws fans from both. The fresh and fiery interpretations of Thai food are a revelation for diners who have settled for “meh” Asian food for all these years, and the sleek decor of the dining room is worlds apart from the traditional paper lanterns and dragon paintings that we’ve grown accustomed to.

There’s certain novelty to enjoying fine dining in the same old theater where you might have watched Jurassic Park as a youth, even if the dramatic overhaul of the decor renders the interior almost unrecognizable. Sinema has quickly become a prime date destination to experience fun and innovative seasonal cuisine in one of the best atmospheres anywhere in the city.

This article is reproduced from “The 21 Best Restaurants in Nashville Right Now” by Chris Chamberlain, Thrillist Nashville.