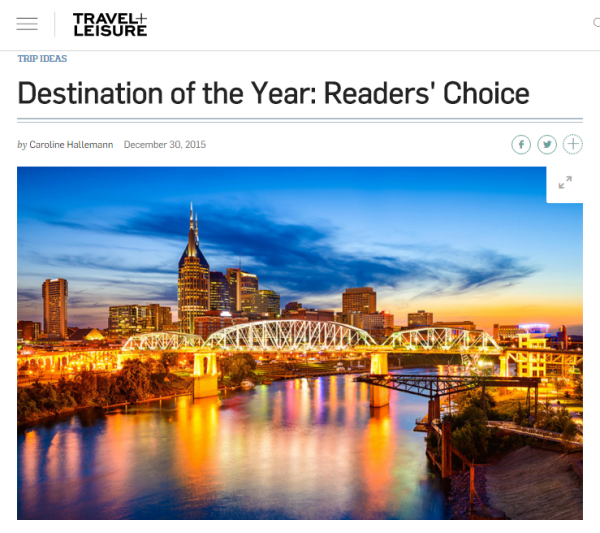 Travel + Leisure Crowns Nashville as the Destination of the Year

With 15.8 percent of the votes, Nashville, Tennessee, is the newly crowned winner of Travel + Leisure’s readers’ poll for Destination of the Year, beating out international hot spots like Adelaide, Australia, and Korea, as well as fellow domestic darlings New Orleans and Detroit, in addition to Cuba, our editors’ pick for the award. In fact, Nashville received almost double the votes of the number two destination, Charleston, with Cuba coming in third with 6.5% of the votes. Other readers’ choice stand-outs included Greece, Iceland, Istanbul, and Paris.

A perennial tourist favorite, Music City has been reveling in its “It-City” status for a while now, but the Tennessee capital only gets more exciting with each year—and 2015 was no exception. Construction has started on several new hotels downtown (a 21c and a Virgin Hotel, among others); the city’s convention center, which opened in the summer of 2013, continues to bring in business travelers; and an influx of bachelor and bachelorette travelers have practically inspired a new nightlife industry downtown. But the real pull for travelers visiting Nashville in 2015 was the food.

Restaurant openings ranging from Biscuit Love, the brick-and-mortar iteration of a local food truck favorite, to Le Sel, a new-French concept from the team behind Catbird Seat, and Embers Ski Lodge, a themed gastro-pub in the popular 12South neighborhood are solidifying Nashville’s place as a culinary capital in the new American South.

This article is reproduced from Destination of the Year: Readers’ Choice by Caroline Hallemann, Travel + Leisure.